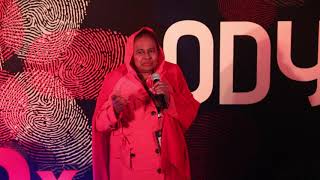 Hosne Ara Begum, herself a victim of discrimination and abuse, has launched a genuine grassroots movement initiated by poor women, which is growing rapidly across northern Bangladesh.

Hosne Ara has experienced life as both a young man and a woman. She was born in 1953, and raised as a male, experiencing the normal privileges shown to sons. In 1975, Hosne Ara Begum underwent a sex transformation to become totally female. As a result, she has had the opportunity to observe society from both the male and female perspectives. It has been this unusual set of circumstances that resulted in Hosne Ara's keen sensitivity to the discrimination against women based only on their gender.Hosne Ara began her career as a scientist. She completed her M.Sc. in botany from Rajshahi University. Her thesis, titled "Biomedical Jenetres," was published in B. Campustrees, a journal of agricultural research in Bangladesh. She was successfully engaged in agricultural cultivation, testing various indigenous methods to grow more food. She was recognized by the Ministry of Agriculture for her outstanding performance.In 1978, she joined a local college as a lecturer, where in addition to teaching, she founded TMSS and functioned as the director of the organization on a part-time, honorary basis. As the movement has taken off, she has increasingly felt the need to commit herself to it full time. In 1991, she resigned from the college to become full-time executive director, hoping over the coming years to spread her genuinely grassroots women's movement across the country.

Keenly aware of the enormous difficulties poor Bangladeshi women face, Hosne Ara has committed herself to changing how both men and women perceive women and also the behavior of men toward women that both now accept.Her central idea is quite simple: the mass of poor, almost entirely illiterate Bangladeshi women must take it upon themselves to change the situation. They have to be the main force for change. Nothing else will be sufficient.To do so, they must first unite--to encourage one another as they face up to their situation, as they change their perceptions, and, especially, as they confront a society unwilling to listen and press steadily for basic change.For this to be possible these women must control their own organizations. If they cannot do that, how can they do so many more difficult things?Consequently, Hosne Ara is launching the country's grassroots-run movement of, not just for, poor women. She founded the Thengamala Mohila Sabut Sangha to provide the organizational framework for such a movement and over the last decade has learned how systematically to make such a grassroots-run movement work practically. It works powerfully because it releases and then serves as a channel for the energy and motivation of women who have been terribly victimized.The movement is creative as well as powerful because it draws ideas, strategies, and programs directly from its members. For example, a suggestion from one of the local chapters led the Sangha to press the government and finally win the right to take full responsibility for building some of the local roads. Suddenly poor women were managing--skillfully, honestly, and at low cost--significant local public works. So much for the accepted image of women relegated to carrying earth on their heads or sitting on top of a pile of stones patiently breaking them into gravel with a hammer!The leadership, which comes from the local women, is very strong and resilient. Rather than hire professionals to train local women as paraprofessionals, Hosne Ara identifies talented local members and develops their own leadership capacity. This strategy leaves a base of local leadership in place, and does not build in any dependence on the so-called professionals.Hosne Ara has a vision that one day men and women will work together as equal partners, sharing responsibilities and burdens. Consequently, she includes men, albeit only a few, in the education and development process.

The Bangladeshi woman's lot has traditionally been miserably hard. Subservient in every aspect to her husband, her role has been only to administer to the husband's sexual needs, bear and raise children, and perform endless household and other work. She has remained, with rare exception, illiterate. Many men believe this order of things is God-given, that He termed man the "Ashraful Makluhat" (the best of all creatures), a perspective that makes change that much harder. There are a variety of traditional institutional arrangements that often turn a bad situation desperate. Arranged marriages tied to heavy dowries followed by the male's ability to divorce a wife and send her back to her (generally unwilling) family is a pattern that invites and in fact leads to terrible victimization of women, who typically have little or no ability to defend themselves.Very young marriages and pregnancies jeopardize the health of both mother and child. The women have no voice in the matter of family planning. Adequate preventive health information, let alone health care facilities, is not available, especially in the remote areas.Since women are sometimes seen as less valuable than farm animals, domestic violence and abuse are all too common. Abuse, especially as women grow older and less attractive, can be a harbinger of divorce and abandonment. Being sent back to one's family, which may not be able to afford another mouth, leaves women destitute with few but the most desperate paths left open.Even women fortunate enough to avoid these hardships face terrible barriers separating them from equal opportunity and dignity in life. They are imprisoned by the ideas they and everyone else accepts as defining their role in life. They are imprisoned by illiteracy. They are dependent because they do not have their own economic base, and the chief inputs they need to build such a base--skills, credit, and land--have been largely inaccessible.

Hosne Ara began her current work by mobilizing a small group of mistreated and abused women. These women quickly became a source of emotional support and comfort to one another. They formed a membership group and began a savings program. The women would bring a handful of rice to each meeting. Once enough rice was collected, it was sold. The proceeds became the basis for a small loan fund. From the savings, small loans were made to the women. From these humble beginnings Hosne Ara has now built a huge membership organization with a staff of over seventy-five volunteer workers and over 400 local chapters.In organizing these small membership groups, which now organize everything from education to cooperative production, Hosne Ara stresses the importance of having all members in the group be of the same economic level. She feels that this homogeneity is essential to open participation. She always holds the first meeting of the group at the poorest member's house. She feels that the members understand each other more and trust each other more easily if they have the same economic constraints.Hosne Ara is an expert at mobilizing local resources, and this has been a major source of her success. The movement's members provide a steady flow of new ideas, which Hosne Ara and her senior colleagues cull regularly and very carefully. The organization also donates the human talent and time necessary to do the work, specifically including helping new chapters start up.The movement's members also enable it to tackle some of the most apparently intractable structural causes of injustice. For example, it has allowed Hosne Ara to initiate a quite innovative antidowry and domestic abuse strategy in some of her project target areas. On a strictly voluntary basis, some of the women have joined together and arranged compatible marriages and have dropped the dowry requirement. Village women monitor the married couple to ensure that there is no abuse. If problems arise, they intervene. The peer monitoring system is working and may become a widely used method to fight both the dowry system and domestic abuse.Hosne Ara has also been bold in her approach to family planning activities. She has stressed men's responsibility in participating in family planning. The men are taught about male sterilization methods, condom use, and their role in limiting family size. This approach also helps to break down stereotypes based on sex roles.In organizing a movement that now must operate on a very large scale, that must undertake complex management tasks including those in corruption-prone areas like road construction, Hosne Ara faces a classic managerial challenge. However, little is going to catch her by surprise. How will she guard against corruption in her own ranks? She has thought about this and has worked out a wide array of realistic checks and balances. For example, how does she ensure the integrity of her road-building operations? In part this is a matter of overall morale, reinforced by an aura of openness and collective examination and discussion of everything the local groups and the individual members do. In part it is a clear and regularly followed policy of throwing any members found to be acting dishonestly out of the organization. In part it is Hosne Ara's tough savvy reflected in policies like the following. At any one construction site, she will have work groups from a number of disparate local chapters (all watching one another). Then, after a while these work groups will be shifted apart and new combinations will come together at each site. In this way, peer groups will constantly be monitoring one another's behavior.